The project SoDa answers the needs of industry and research for information on solar radiation parameters with a satisfactory quality. The methodology is user-driven with a large involvement of users in the project. A prototype service will be developed that will integrate and efficiently exploit diverse networked information sources to supply value-added information in a selected number of environmental applications. The information sources also include application-specific user-oriented numerical models and advanced algorithms. Algorithms based on innovative techniques in data fusion, data mining, data processing, and data assimilation in numerical models have been developed and tested to supply value-added information on solar radiation. The service has been validated through users trials, and its benefits were assessed. The project SoDa focuses on several applications in environment and connected domains: air quality in cities, vegetation, coastal zones, energy-conscious building design and daylighting, and industrial use of renewable energies.

A multi-disciplinary consortium has been assembled, which gathers companies and researchers with the necessary expertise in solar radiation and information and communications technologies. Customers and potential users are also represented as partners in the consortium via the involvement of commercial private vendors of solar radiation databases and of representatives of large international or local environmental research and development programs. 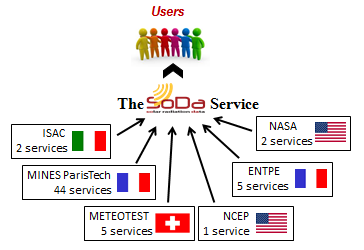