Statistics - For a better understanding

The page describes the validation protocol adopted to compare a dataset against a reference. In our case, this protocol concerns the comparison of satellite-based irradiation values against high quality ground station measurements, and is in line with the ISO norm and the WMO recommendations (References: ISO Guide 1995, WMO 1981, 2008).

NB concerning the comparison between Direct Normal Irradiance component measured by a ground station and satellite estimations: Measurements with a pyrheliometer (Direct Normal Irradiance component): the pyheliometers have a larger half opening angle than the satellite-based estimations (HelioClim-3, MACC-RAD...) which obeys by construction to the definition given by the community of the radiative transfer models where the sun is more punctual. This has a very limited influence in clear sky conditions, but in overcast conditions, the contribution of the circumsolar  irradiance to the pyrheliometer measurements may exceed 50% due to specific effects of clouds, especially that of cirrus clouds. No correction is presently brought to the HelioClim-3 or MACC-RAD outputs.

NB: the third column corresponds to the statistical results for the comparison of HelioClim-3 version 5 versus the measurements of the BSRN station of Carpentras (44.083°, 5.059°), France ("Quality assessment results of GHI values for Carpentras - 15 min irradiation values"

For a better understanding of the indices...

In most of the publications, you will always find the results for a few indices to summarize the discrepancy between two datasets.

We chose the following indices:

The graph below is a 2-D histogram, which represents the 10 min HelioClim-3 data versus the corresponding 10 min data from the Carpentras BSRN station after Quality Check for the almost 6 years of data available between 2004 and 2009. Interpretation of the graph

The relative bias in percent is 1.7, which informs on a slight global overestimation of HelioClim-3 version 5 compared to the in-situ data over the 6 years of available data. The value corresponds to the distance between the black dashed and the red dashed lines (small double arrow). The slight overestimation is due to the orange cloud of points corresponding to low irradiation values, i.e. mainly the winter period. Ideal value is zero.

The correlation coefficient is an important index which cannot be easily represented on the graph. The closer to the ideal value of 1, the more "in phase" the two datasets ; In other words, the observation (in-situ data) and the estimation (HelioClim3-v5) should capture the weather transitions at the same instant. 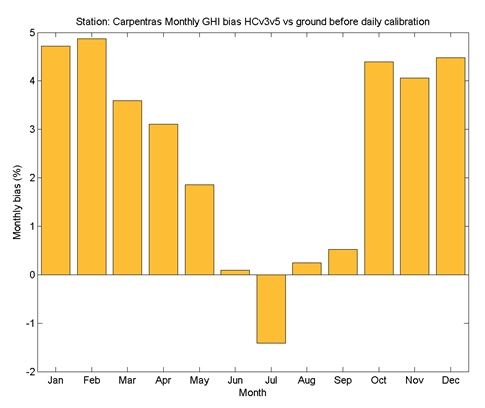 Please also note that a calibration of the HelioClim-3 version 5 data with these measurements lead to a relative bias over the whole period of 0.4%, and decrease the relative bias per month by a factor of approx. 2!